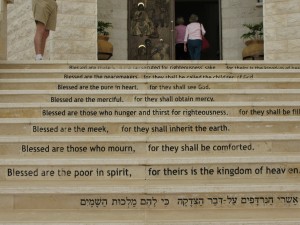 Blessed are the poor in spirit for theirs is the kingdom of heaven: This is a bit like Cinderella. She was poor while living with evil people, but she was still destined for royalty—so she kept her head up!

Blessed are they who mourn for they shall be comforted: This is like the beast in Beauty and the Beast. He had a lonely and awful life until a sweet young girl brought him back to his royal self and all he was promised.

Blessed are the meek for they shall possess the earth: This is a bit like Mickey Mouse. He was Disney’s first character…who would have thought that a dear little mouse could be known in every house across the land?

Blessed are they who hunger and thirst for justice for they shall be satisfied: In the Great Mouse Detective, Basil the mouse detective has devoted his life to solving crimes. He goes in pursuit of justice that ends up saving the queen, whose death would have meant death to the land!

Blessed are the merciful, for they shall obtain mercy: In The Hunchback of Notre Dame, Esmerelda shows kindness and mercy to the hunchback Quasimodo, who in turn saves her life.

Blessed are the pure of heart, for they shall see God: The evil stepmother in Snow White hates the young princess because of her beauty and purity. After an attempt on Snow White’s life fails, the stepmother disguises herself and brings the young princess a poisoned apple. She is awakened from death by the kiss of a prince, which can be compared to Jesus awakening us from death so that we can live happily ever after with him!

Blessed are the peacemakers for they shall be called sons of God: Among the most peaceful of animals are deer. Bambi was named Prince of the Forest. A lot like our Prince of Peace, he had to lead all the deer to safety so as not to be burned up in a hellish forest fire.

Blessed are they who suffer persecution for justice sake for theirs is the kingdom of heaven: A great example of a persecuted Disney character is Mulan, who did nothing wrong, unless being born female is wrong! Even though she trained well to be a soldier, she was sent home in disgrace when her “crime” (gender) was discovered. But when it came time to defeat the enemy, the Huns, Mulan saved the day. Similar to the Kingdom of Heaven was her being named “a woman so rare that she comes along once in a Dynasty.” Her battle with the Huns is reminiscent of David facing Goliath!

Many images of the Disney characters are available online, and so are trailers of all their movies. These can make great additions while teaching the Beatitudes in a way kids are likely to cherish!