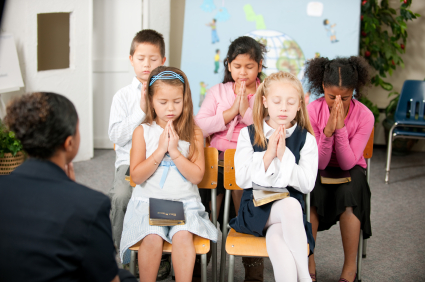 Many adults admit that when they hear the word sermon, they think: Boring!

These adults are also the first to admit that from the time they were born, their parents took them to church, where they were forced to sit still and not fidget during the sermon, which they considered the longest half hour of the week.

A children’s sermon, that can grab a child’s interest in the first sentence and hold it until the last, is the ideal way to change this impression about sermons, and there are five tips  that will help you turn it into something so positive that children rush to hear it with the same enthusiasm they rush to the beach or their favorite swimming pool.

First, let me tell you about a Sunday school teacher who reported an ingenious plan that totally cured this problem in her church.   The children there do not have this impression of sermons being boring, because the children never sat through an adult one.

During what their church calls “Talk Time”, when neighbor greets neighbor, the children exit to a room nearby where they have “Kids Own Worship”.  Here they experience children’s worship through uplifting songs, fun and memorable Bible learning through children’s church lessons.

While this plan has been tremendously successful in one church, it may not be possible in others.  However, the secret to successful children’s sermons consists of five basic steps that make the Bible relevant to youth.

Creating an Engaging Sermon for Kids

1.   Be certain you know what the scripture means.  As one Sunday school teacher explained:  “I loved going to Sunday school as a child, and I adored Bible stories, but it wasn’t until I became an adult that I realized what these stories really meant.  “Jonah and the Whale,” for example was one of my favorites, but I think I lost the meaning by confusing the story with Pinocchio, and I can still visualize that picture of Geppetto sitting in his boat in the whale’s belly.

2. To make the story relevant to youth, it is imperative that you find some way to apply it to present day life.   While it wouldn’t be too difficult for you to dream up a tale about a boy who wouldn’t listen when God spoke to him and tried to hide, you might be surprised at the answers you get if you asked the students to come up with an example.  It would be wise to have a back up example ready, just in case, but students will amaze you with the experiences they have had in school or while playing sports, and you might find yourself with a dozen examples.

3.  One of the most important things to remember if you want  the story to be relevant to youth is to tell it in their language.   As one Sunday school teacher explained, “One of the stories that impressed me most was called, “Moses Thinks He’s a Dork”, and from beginning to end, the story of Moses was told in today’s teen vernacular, and it made for delightful and entertaining reading.

4.  Visual props will also be a great asset in making the story relevant.  Pictures can be used, or any prop that adds to the story like a soccer ball, a basket ball, a football helmet, or even a set of shoulder pads that make the person wearing them look gigantic and tough, when he’s actually no bigger than anyone else.

5.  Leave them with one simple thought.   It can be an outgrowth of a scripture, but it should accent the event in a simple phrase, like:  “You cannot hide from God.”  You could even add: “You may go to the ends of the earth, but nowhere can you hide from God.”

When Bible stories become relevant to the world today, they become something of value and far more than a history lesson.  In  each story there is a message that applies to life today as strongly as it did when it was written.

In biblical times, women were not considered to be influential as a whole. That doesn’t mean there weren’t many great influential women in the Bible! Some were royalty; some rose out of poverty, and they made their way into the Books of the Bible due to heroic acts or having shown great virtue under duress.

There are stories or honorable mentions of nearly 180 great women in the Bible. If you want to celebrate some with your students, here’s our list of Twelve Great Influential Women of the Bible from the Old and New Testaments whom kids should know, all of whom make for great study:

Sarah – Wife of Abraham, she is best known for bearing Isaac at the age of 90 and being a great mother. Isaac was distraught at her death and only consoled by meeting Rebekah, whom he married. But it wasn’t all good. Impatient for a child in her earlier years, Sarah forced her husband on Haggai, their maid, who conceived Ishmael and later was banished from Abraham’s employ.

Rahab—Her tale begins with Israel’s as a nation.  Joshua sent spites into the walled city of Jericho having decided it would be the first city that the Hebrews invaded after 40 long years in the desert.  Word had gone out that the Hebrews has some strange and powerful God on their side, and the city was afraid it would be conquered. Rahab was the only citizen with the forethought and nerve to help out the Hebrew spies.  In return, they gave sanctuary to her and her family.

Ruth – A young, pretty widow who could have opted to marry again quickly, Ruth instead chose to stay with her distraught mother-in-law, despite a threatening famine. The two concocted a plan for Ruth to capture the heart of kind-hearted Boaz, a distant relative and wealthy farmer, who eventually married her. Ruth is known for her loyalty, hard work, and risk-taking.

Deborah stepped into the history of Israel at a time when the nation had been so beaten down by Jabin, the King of Hazer, that their spirit had been broken, and they existed in a stupor of indifference.  Deborah, a judge and prophetess, against great odds, set out to free Israel from this bondage. She and sidekick Barak formed an army of 10,000 men and gave Israel back their freedom and their spirit.  For Israel this was a grand triumph, and Deborah, the wife of Lapiodth was responsible for this amazing victory.

Esther – Esther was raised by her uncle Mordecai.  King Ahasuerus married Esther.  Mordecai urged Esther not to tell the king that they were Jewish and Esther kept this secret. Matters came to a head when the wicked and scheming Haman had the king issue a decree that all Jewish people in the land be executed.  The king signed and gave it his seal of approval.  Esther, at grave risk to herself, intervened.   As a result of her careful handling of the situation, Haman was hanged on the gallows he built for Mordecai, and the decree was never carried out.

Abigail was the wife of Nabal.  The name Nabal means fool, and in addition to that he was spoiled and insolent.  When he insulted David, he put his life and that of his entire family in danger.   It was because of Abigail’s sharp mind and careful planning that their lives were spared.   After Nabal died, Abigail became the wife of David.

Mary Mother of Jesus resided in Nazareth.  While she was engaged to Joseph, the immaculate conception took place and the archangel, Gabriel, appeared to her in a dream, telling her to name the baby Jesus and that he was the Messiah.  After delivering in a manger, being exiled to Egypt, and living what would consider a tough blue-collar life in Nazareth, Mary become one of Jesus’ foremost supporters through his ministry.  Jesus worked his first miracle of  turning water into wine at her prompting, and she was at his crucifixion, whereas some of the disciples were not. In some parts of Christendom she is considered “Holy Mary, Mother of God.”  Others relate to her humanness and God’s implied love of the masses because of her.

Elizabeth was a cousin to Mary and married to Zacharias.   They were childless and were growing too old to have children.   When the angel Gabriel appeared to Zacharias and said he would have a son, Zacharias raised doubts.  The angel made him mute until John’s birth.  During Elizabeth’s pregnancy, her cousin Mary, pregnant with Jesus, came to Hebron in Judah to visit and stayed for three months.  When Elizabeth’s baby was born, Zacharias was finally able to speak again and said the baby’s name would be John.

Mary Magdalene – A business woman and friend of Jesus, she was the first to reach Jesus’ tomb at the resurrection and take the angels’ message back to the disciples that He was alive.  Legend has been unkind to her, often identifying her as a prostitute, though there is no foundation which would confirm this.  She was a business woman with an astute sense of godliness.

Mary and Martha of Bethany – were sisters of Lazarus and all three were close friends of Jesus. When he and his disciples came for dinner, Mary listened to Jesus, and Martha grumbled about doing all the work.  Jesus told Martha not to worry about unimportant things.   At another time, Martha and Mary sent for Jesus, because their brother Lazarus was seriously ill.   By the time Jesus arrived, Lazarus was dead, and Jesus performed a miracle by bringing him back to life.  Due to the dinner story, Martha has become famed for her hospitality and Mary for sitting by Jesus and absorbing everything he said.

Lydia – Like many women of the epistles, there are only brief mentions or short tales.  But Lydia’s was distinct in that she was a business woman, and it is through her we see our doctrine that we make the choice but God saves.  “The Lord opened her heart to heed the things spoken by Paul,” reads acts 16.  She was very hospitable to the apostles, insisting they stay with her after her heart was opened to the great news of the gospel.

Other influential women in the Bible span the Old Testament, Gospels and New Testament epistles. But these should give your students a start through great stories or great mentions from the Apostles themselves!